Perched on a geographically favorable hilltop right next to the Ponlachgraben, making it very difficult to conquer, this medieval castle is enthroned above the town. In the olden days, both of the castle gates were only accessible via drawbridges. 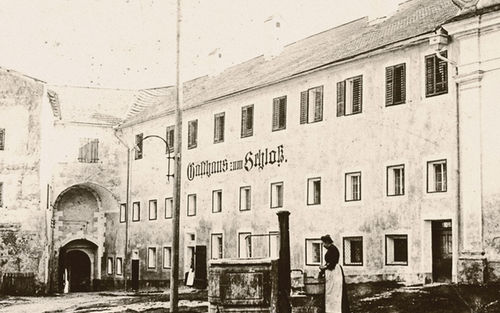 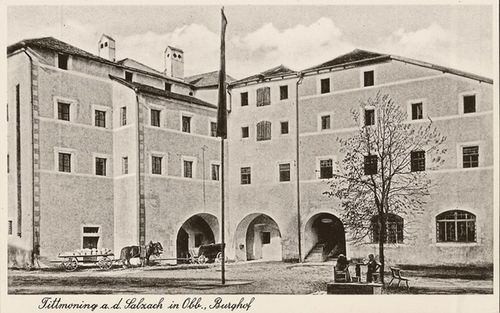 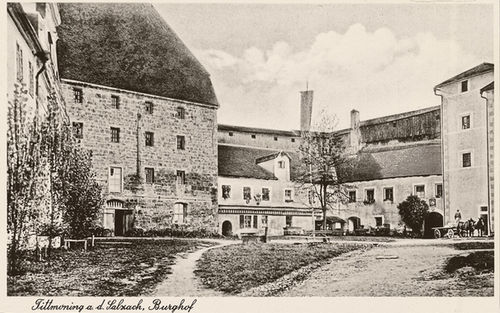 Documentation exists that a border fortification was constructed by Salzburg’s Archbishop Eberhard II in 1234 to provide protection against the Bavarian stronghold of Burghausen. A sheriff appointed by the archbishop administered the castle as well as regional affairs and jurisdiction. Betrayal led to the town and castle falling to Emperor Ludwig of Bavaria in 1324. Only three years later could it be bought back by Archbishop Friedrich III at a cost of 5500 Salzburg Pence. Over the course of time, the castle was expanded. In around 1500, this included the building of the mighty granary with its steep, brick-red half-hipped roof – a recognizable feature of this castle visible even from far away. On the outer façade you can also see the robust window grilles which were intended to protect the valuable grain which had been collected in Tittmoning from trespassers.

Castle turned into a hunting lodge in 1615
In the course of the Salt War between Bavaria and Salzburg, the castle suffered serious damage in 1611. It is presumed that Archbishop Markus Sittikus commissioned his architect Santino Solari (who built Salzburg Cathedral) with rebuilding the castle and remodeling it into a hunting lodge. The castle chapel, with its magnificent altar painting by Johann Michael Rottmayr, was commissioned in 1693 by Archbishop Johann Ernst Graf von Thun.

Tittmoning comes to Bavaria
As a consequence of the Napoleonic Wars, Tittmoning’s 1000-year affiliation with Salzburg came to an end. Temporarily in 1810 and subsequently permanently in 1816, Tittmoning became part of Bavaria.
Gradually, parts of castle and the surrounding land became privately owned. Bought up in 1852, the castle and the adjacent Ponlachgraben became the property of the municipality itself. Put to use in various ways, sadly the fortification fell increasingly into disrepair.

Founding of the museum
The local heritage museum, which the Historical Society had kept housed in the tight confines of the townhall since 1901, was relocated in 1911 to specially renovated rooms in the castle. Use of the castle as a museum also guaranteed that this valuable historic monument would be preserved in future.

Upon the order of the Wehrmacht, the museum collection was removed in 1940 and the castle re-functioned as an officers’ prisoner-of-war as well as internment camp. After the war had ended, the museum finally reopened in 1953 and, 10 years later, acquired the legal status of a foundation. Since 2004, a modern tannery exhibition has also been housed in the castle’s former granary. The name of the foundation “Heimathaus des Rupertiwinkels” was officially changed in 2014 to “Museum Rupertiwinkel”.